The shot: a close up of a young girl. The flag of her beloved country is painted on her face. She sings about a dream for peace and freedom in a childish hymn.

A bomb falls at the 12 second mark.

For a brief moment, time seemed to have stopped; every single person in the shot fell to the ground—surrounded by the living, the unconscious, and the dead—trying to pick themselves up to survive. The girl’s father pauses for a brief second to look at the open skull of an old man who was just standing next to him. He snags his daughter up and runs for the nearest shelter. The girl continued to cry and scream until the end of the video.

This video is the opening scene of Project Syria. Inspired by her own previous work, Nonny de la Pena produced Project Syria in 2013 to raise awareness not just for the Syrian Refugee Crisis, but to shine a spotlight on the displaced Syrian children.

“It’s an extraordinary opportunity to be building an immersive journalism piece about the Syrian Children Refugees,” said de la Pena, “This is one of the most pressing issues of the time.”

This week, I had the incredible opportunity to borrow a friend’s VR device and experience de la Pena’s famous Project Syria. 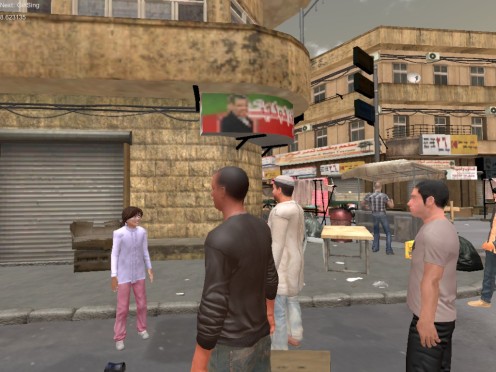 Indeed, much of the project was based around the lives of children. It made a point to open with a young Syrian girl singing about peace, immediately juxtaposed by the images of dead children. The father shook, clutch, and swung his son’s lifeless body, calling for help in a language I did not understand. I tried to lend a helping hand, but forgot for a brief moment that none of the things happening around me were real.

The rest of the project, however, was a disappointment. The bombshell segment in the project’s intro was nearly as long as the next two chapters of the project. We are later brought to a refugee camp, where a family angrily ask for food aid with no avail. The entire project ends shortly later as I watched a group of Syrian children huddle around a fire pit.

It’s shortfalls could be seen in the reviews of the Project, seen on the digital distribution platform Steam.

“It doesn’t make you go wow, it doesn’t [keep] you engaged… it didn’t make me feel anything but bored,” wrote one user on Steam.

Amidst the backlash against Project Syria in the online community, it is important to remember that de la Pena created this experimental work of documentary before Virtual Reality even entered the mainstream. For the people experiencing de la Pena’s work in 2013, it was an emotional experience. One of the audiences of the project wept as she took her VR headset off, still in awe of what she had witnessed. Indeed, Nonny de la Pena was simply way too ahead of the game. She simply lacked the technology to create the vision in her mind.

De la Pena’s hard work paid off in different forms. Her projects in “VR activism” laid the foundations of a lot of later projects, including Clouds over Sidra, A VR video documentary guided by a charming 12-year-old Sidra, a refugee from Syria. The project puts you not as an observer, but as Sidra herself at a Jordanian refugee camp. More projects surrounding the Syrian Refugee Crisis and other humanitarian crises are currently in the works, putting more issues onto the front page with the advent of Virtual Reality technology.

“We make these pieces because we can put you on scene, make you feel like you’re witness to an actual event. You’re not separated by a television set or a screen; you actually feel like you’re there,” -Nonny de la Pena

Despite the shortfalls of Project Syria, de la Pena got one thing spot on: The power of virtual reality to elicit emotions in its users. The introduction of VR technology to the market may mean more immersive gameplay to game designers, easier communications for every day people and corporations, but to Nonny de la Pena, it’s a tool to create emotions inaccessible through other forms of media. With de la Pena’s primitive contribution to the genre of Virtual Reality activism, the scales of these projects may only grow exponentially as this technology becomes more accessible to the general public.

One thought on “Project Syria: In the shoes of war refugees through Virtual Reality Activism”